Dr. Edward A. Duckworth, MD, MS, FAANS is Director of Neurosurgery for St. Luke’s Health System. He is an intracranial-focused neurosurgeon with fellowship training in cerebrovascular and cranial base surgery, as well as in endovascular neurosurgery and interventional neuroradiology.

A 59-year-old male patient presented at St. Luke’s with symptoms including headaches, difficulty swallowing, and ringing in his ears. An MRI scan revealed cerebellar tonsils descending to the C1 level, compressing the spinal cord. There was an associated small syrinx (cyst) within the spinal cord.

Abnormally shaped cerebellar tonsils displaced below the level of the foramen magnam characterize a Chiari I malformation.

Navigation was not used for the procedure, and the decompression was performed with the guidance of bkActiv and the Craniotomy Transducer (N13C5). Intraoperative ultrasound was used in conjunction with a microscope. The patient was positioned prone with the head flexed.

A vertical incision was made from the inion down to the level of C2 and the nuchal musculature through the median raphe. Next, a small suboccipital craniectomy (bone removal), expanding the foramen magnum and C1 laminectomy, were performed for bony decompression.

Real-time active imaging was used before opening the dura to visualize the cerebellar tonsils and assess the displacement. The brain stem and spinal cord were clearly visualized in fine detail; this would serve to provide orientation for the procedure. The real-time intraoperative ultrasound showed an abnormal craniocaudal piston motion of the cerebellar tonsils with each cardiac cycle [See fig. 1]. 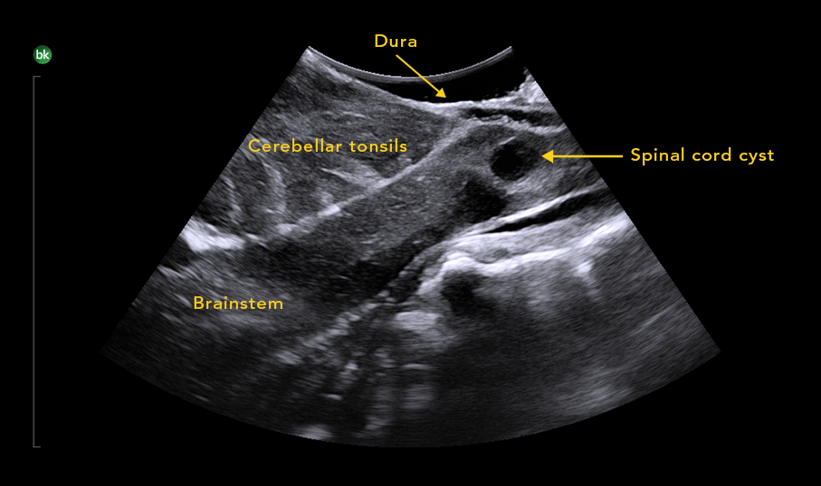 Fig. 1. Intraoperative ultrasound was used to image brain stem, spine, and displacement of the cerebellar tonsils

Guiding and Assessing the Decompression

When the dura was opened, the tonsils and the spinal cord were visualized using the Craniotomy Transducer. Bipolar electrocautery was then used to shrink the cerebellar tonsils.

After concluding the decompression and performing a duraplasty, the intraoperative ultrasound was used to compare and assess the post decompression status. The Dual Live Compare feature was activated to see the live imaging next to a baseline scan from earlier in the procedure [See fig. 2]. Watch the clip below to see the flow of cerebrospinal fluid (CSF) post decompression.

Fig. 2. Dual Live Compare with the live image on the left and the stored image from before opening the dura on the right

The procedure was finished by covering the suture line with a dural sealant to prevent CSF, and reapproximating the muscle/fascia and skin.

In summary, real-time ultrasound provided support and reassurance in assessing the details of the Chiari malformation and the patient’s spinal cord before opening the dura. At the end of the procedure, bkActiv helped assess and confirm the decompression.

Learn more about intraoperative ultrasound for neurosurgery, including its use in accounting for brain shift and in tumor resections.