Dr. Gavin Quigley is a prominent consultant neurosurgeon based at the Royal Victoria Hospital in Belfast, Northern Ireland, where his team provide care for 1.8 million people. Dr. Quigley has previously worked as an advisor for HIQA (Health Information and Quality Assessment) in the Republic of Ireland and for NICE (National Institute for Clinical Excellence) in the UK, and was appointed as a Consultant Neurosurgeon to the National Neurosurgical Unit in Dublin, Ireland in 2006. He returned to Northern Ireland in 2009, taking up his current position at The Royal Victoria Hospital.


A firm proponent of the use of ultrasound in neurosurgery, Dr. Quigley and his team have incorporated ultrasound technology into cranial and spinal surgery over the last six years, and since becoming department head in 2012, Dr. Quigley has spearheaded a shift to using BK Ultrasound within the OR. “We’ve found ultrasound to be very useful, giving us real-time, live updates of what we’re doing. It took us a little bit of time to get used to interpreting the images but I think most of us have found it a very useful adjunct to standard imaging.”

“We’ve been using the BK Ultrasound system now for 3 years”, Dr. Quigley continued, “and we have introduced it to our children’s hospital as well because we’ve found it so useful. In fact, our anesthetic colleagues prefer to use our BK system. We have a linear transducer which they use for central line and arterial line insertion, so it’s often used right from the start of the case and then handed over to the neurosurgeons. I think everybody’s been very comfortable with it and we’ve found it very useful.”

Dr. Quigley is also a champion of BK Ultrasound-compatible Brainlab technology, which, among other things, offers composite views of intraoperative ultrasound images and reformatted CT or MR images. Clinicians are offered advanced resection control and brain shift compensation. “The advantage of linking ultrasound to Brainlab is that it gives us a clear direction, compared to the pre-op image, and it’s much easier to relate to what you’re seeing on the ultrasound. I would suggest that everybody, if they’re going to invest in an ultrasound system, link it to their image guidance system so that you’ve got a really good idea of which direction you’re looking, and you will be much more familiar with the ultrasound appearances and how they relate to pathology.” 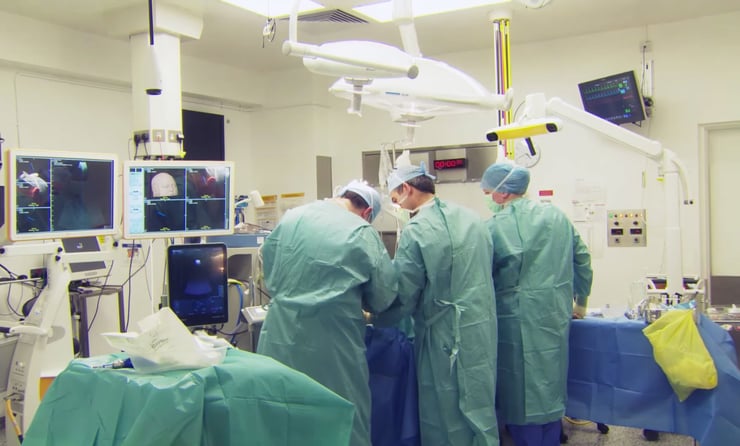 “The ultrasound allows us to look at the degree of brain shift”, explained Dr. Quigley, “and gives us an idea of whether we need to adjust what we’re doing surgically to correct for that. It gives us real-time updates as well of the position of cysts and whether we’ve decompressed them. We can look at catheter position, we can track needle position with a live image and it’s used widely to judge the degree of resection, particularly in high-grade brain tumors where there’s a very clear interface in ultrasound between what appears to be high-grade tumor and normal brain.”

Laminectomies are neurosurgical procedures in which the surgeon removes part of the lamina on the dorsal fin of a vertebra, and it’s a procedure that forms a significant part of Dr. Quigley’s work. Here, he is able to use ultrasound as a window into the spine. “What we are able to do with ultrasound is to make little windows in to the body, and we are able to judge the extent of the tumor and therefore tailor our need for laminectomy. We can restrict the laminectomy to just the levels we need. It means that we are able to be clearer about where we are actually operating.”

The 8863 Burr Hole and 8862 Craniotomy neurosurgical transducers were designed with weight, maneuverability and precision in mind. How does Dr. Quigley find them to use in the OR?

As an experienced surgeon, why does Dr. Quigley rely on BK Ultrasound technology for arguably the most sophisticated of surgical specialties – neurosurgery? The answer is simple: ease-of-use and size. “I think the advantage of the BK system is that it’s easy to set up. We’ve got two specific cranial probes and the resolution and screen image is excellent, and it’s very easy to adjust it in the theater and our staff are comfortable with the adjustment. It’s also a nice, portable design that fits into a small, crowded neurosurgical OR very well.”