Safe, Real-Time Visualization in a Cholecystectomy Case with Intraoperative Ultrasound

Mr. Somaiah Aroori, MB BS, MS (Surg), FRCS (Gen Surg) is a consultant hepatobiliary and renal transplant surgeon at Derriford Hospital and University Hospital Plymouth in the UK. He has more than 10 years of experience in the use of intraoperative ultrasound for HPB and general surgery. University Hospital Plymouth treats many patients with benign and malignant lesions in the liver, pancreas, and gallbladder.

A 31-year-old female patient presented with acute epigastric/right-sided abdominal pain that had lasted about two to three days. She had no significant past medical history apart from h/o indigestion for several months and some intentional weight loss. She was nine weeks pregnant.

On examination, the patient was shown to have a BMI of 29, but otherwise well. Investigations revealed deranged liver function tests with raised ALT, ALP, bilirubin, and serum lipase of 15,000. She was diagnosed with gallstone pancreatitis and treated appropriately. An abdominal ultrasound confirmed multiple gallstones inside the gallbladder and inside a dilated common bile duct (CBD). As the patient had pancreatitis secondary to gallstones, it was decided to operate and remove the gallbladder and stones in the CBD in a single-setting laparoscopic procedure, rather than subjecting her to endoscopic retrograde cholangiopancreatography (ERCP) and its associated risks and radiation exposure.

When intraoperative ultrasound was introduced in the beginning of the procedure, the 4-Way Laparoscopic Transducer was used to visualize anatomy and determine that the gallbladder had thick walls and multiple stones [See Figs. 1, 2A, 2B]. The common uses of real-time imaging in the early steps of this procedure are to determine the normality or abnormality of anatomy and to investigate the intrahepatic vasculature. 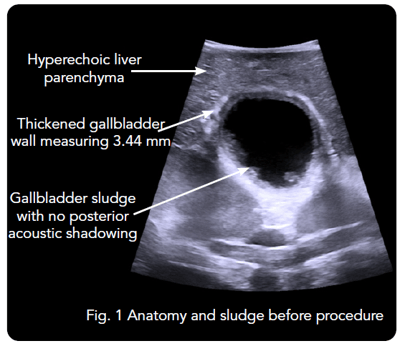 Determining Number and Size of Stones

Real-time intraoperative ultrasound was also used to confirm the presence of several stones in the dilated CBD. Imaging was used to identify the junction of the cystic duct with CBD and to visualize the stones in the CBD as well [See Figs. 3A, 3B, 4]. Color Doppler was activated to visualize the right hepatic artery and the portal vein. This information helped the surgeon assess resectability and revise the surgical plans. 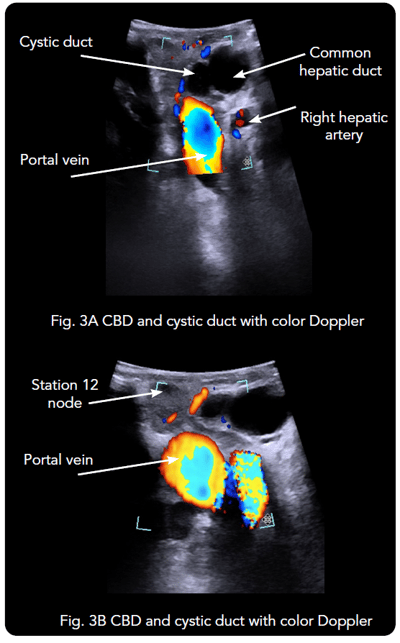 Confirming Results During the Procedure

15 stones were removed from the bile duct. Intraoperative ultrasound was then used to assess whether the procedure was complete, with the CBD being traced to its exit point inside the second part of the duodenum [See Fig. 5]. 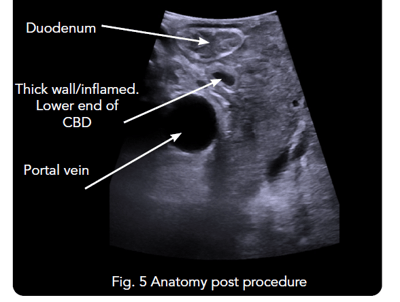 “Without ultrasound, it would not have been possible to confirm the presence of stones in the bile duct, and I would not have been able to measure the diameter of the cystic duct and CBD,” Mr. Aroori explained, and elaborated on how the continuous use of intraoperative ultrasound provided useful information throughout the procedure.

Real-time imaging made it possible to measure the size and number of stones before deciding the best approach for removing the CBD stones. At the end of the procedure, the imaging allowed the surgeon to confirm the results before ending surgery.

Throughout the procedure, intraoperative imaging provided real-time information that could not be obtained from preoperative imaging. It was especially helpful for identification of anatomy and confirmation of the presence of gallstones and CBD stones in order to choose between the transcystic or transcholedochal approaches.