Use of Ultrasound During Two Stage Laparoscopic Liver Resection

Apart from a limited number of case studies1,2, the adoption of the laparoscopic approach in a two-stage hepatectomy has not yet been extensively described in literature.

Preoperative imaging (MRI of the liver) revealed extensive bilobar liver metastases, and the patient was treated with four cycles of combination chemotherapy (FOLFOX) and Cetuximab. New imaging after four cycles of chemotherapy revealed a very good response, and a two-stage hepatectomy was planned during the MDT (Multidisciplinary Team Meeting). During the first stage, the patient underwent a combined laparoscopic sigmoidectomy with clearance of the left hemiliver. 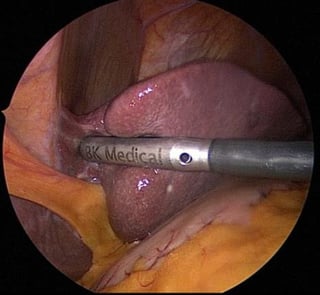 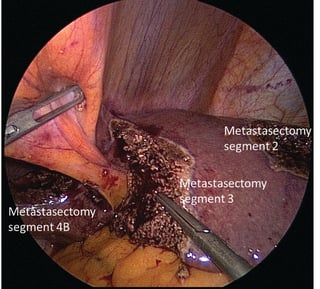 Fig. 2. During the first stage hepatectomy three metastasectomies were performed in
the left hemiliver (1 in segment 2 and 1 in segment 3 and segment 4B).

A volumetry of the left hemiliver revealed a volume of 37% and it was not necessary to perform a right portal vein embolisation. Four weeks after the first-step procedure, a laparoscopic right hemihepatectomy was performed. The hepatoduodenal ligament was opened from the cystic duct to the left to identify the right branch of the hepatic artery. The right hepatic artery was clamped using a laparoscopic vascular clamp and patency of the arterial blood supply to the left hemiliver was checked using intraoperative ultrasound. Once the arterial anatomy was clearly identified, the right branch of the hepatic artery was clipped and cut.

A vessel loop was passed around the portal vein (Fig. 3), which was clamped with a vascular clamp. Patency of the portal flow to the left hemiliver was assessed using intraoperative ultrasound, and the right portal vein was then clipped and cut. The line of demarcation was seen on the surface of the liver. 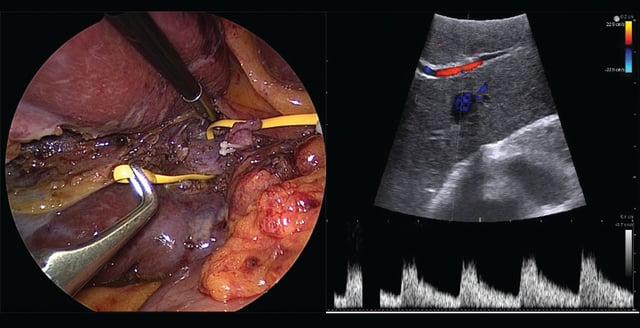 Fig. 3. Laparosopic right hemihepatectomy.
A vessel loop was passed around the portal vein before clipping and transecting the right portal vein. 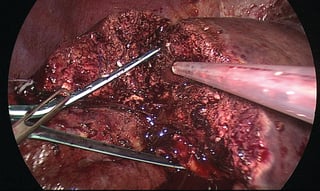 The specimen was removed through a Pfannenstiel incision. Adjuvant chemotherapy was started three weeks later (eight cycles in total).

This case-study was performed under approval by the institutional review board and patient consent, and includes only de-identified patient images. The IOUS was performed with a 10-4.3 MHz 4-way laparoscopic transducer and a BK Ultrasound (Peabody, MA) unit.

A two-stage hepatectomy is a surgical modality recommended for patients with extensive bilobar colorectal liver metastases. Typically, the first step is a parenchymal-preserving liver resection, which can be combined with resection of the primary tumor. The first-stage laparoscopic clearance of one hemiliver could become the gold standard.

Laparoscopic second-stage hepatectomy, which is (mostly) a major hepatectomy, should be limited to selected cases in high-volume HPB (hepatobiliary) centers. Although published data is limited, one of the largest studies published in 201510 showed that laparoscopic two-stage hepatectomy for bilobar colorectal liver metastases is safe, and does not jeopardize long-term outcomes in selected patients.