Use of Ultrasound During Complex Redo Open Liver Resection

Read about the advantages of intraoperative ultrasound in the detection of liver tumours and the planning of surgery.

Initially contraindicated for surgery, bilateral, synchronous, and recurrent lesions are now eligible for surgery due to the evolution of chemotherapy and patient management options. Historically, parenchymal sparing approaches were considered less effective, due to the theoretical impossibility of achieving satisfying resection margins. Based on the fact that a 1 mm margin is sufficient to be considered curative, and that more extended margins do not lead to oncological benefits in terms of recurrence, more and more parenchyma-preserving liver resections are currently being performed for colorectal liver metastases.

Case presentation:
The patient is a 67-year-old man who had an anterior resection for an adenocarcinoma of the sigmoid in 2003. He developed a solitary colorectal liver metastasis in segment 6 in 2006, and a laparoscopic resection of segment 6 was performed. Two years later, he developed a new solitary colorectal liver metastasis in segment 7. A repeat laparoscopic metastasectomy in segment 7 was performed. 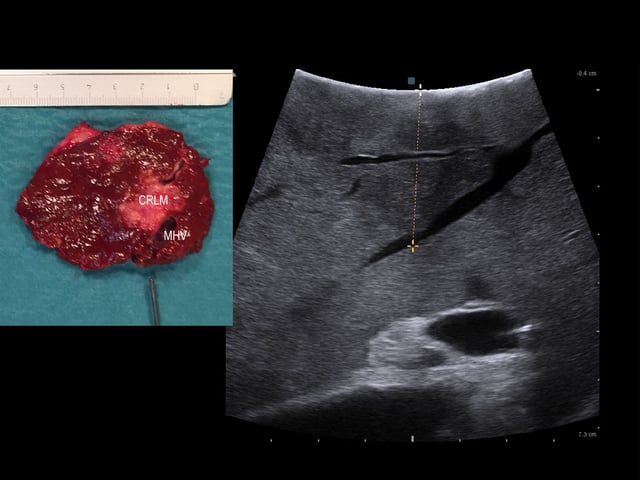 Operative time was 180 minutes, blood loss was 100 cc., and the Pringle manoeuvre was performed for 29 minutes. Parenchymal transection was performed using a bipolar sealing device in combination with a Cavitron Ultrasonic Surgical Aspirator, and central venous pressure during the operation was 3 mm of mercury. The post-operative course was uneventful, and the patient was discharged on day 5 post-operatively. The definitive pathology report confirmed the presence of a 4.5 cm colorectal liver metastases. The resection margins were tumour-free (1.5 cm). 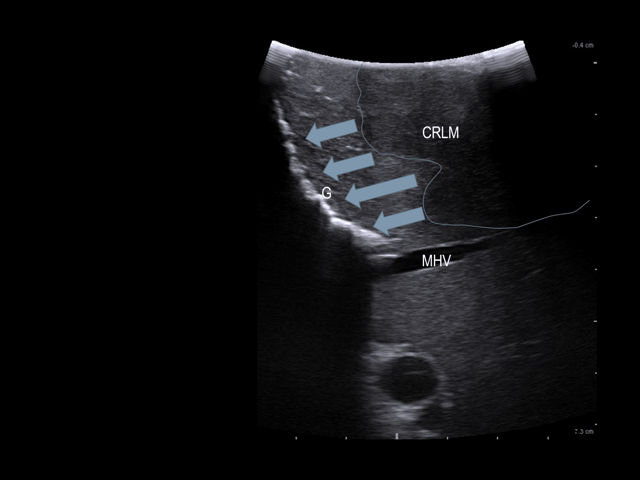 A gauze (G) is placed in the deepest part of the cutting plane. Arrows: tumor-free margin. 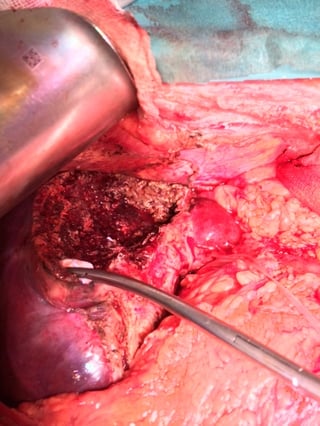 This case-study was performed under approval by the institutional review board and patient consent, and includes only de-identified patient images. The IOUS was performed with a 10-4.3 MHz T-shaped intraoperative transducer and a BK Ultrasound (Peabody, MA) unit.